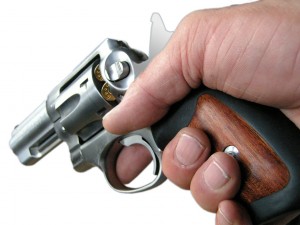 While the state of Ohio allows most individuals to possess firearms, a person who has been convicted of a felony (in Ohio or elsewhere) no longer enjoys the same rights. Anyone convicted of a felony crime is also prohibited under Ohio law from possessing firearms. In fact, the Ohio firearms possession law is quite clear regarding felons, stating that: “The charge of possession of a firearm by a convicted felon is classified as a felony of the third degree. This charge, if convicted, comes with a presumptive sentence of up to 5 years in prison and / or fines of up to $10,000.”

In addition to felons, according to ORC §2923.13, others are prohibited from acquiring, having, carrying, or using any firearm or dangerous ordinance, including when:

(1) The person is a fugitive from justice.

(5) The person is under adjudication of mental incompetence, has been adjudicated as a mental defective, has been committed to a mental institution, has been found by a court to be a mentally ill person subject to court order, or is an involuntary patient other than one who is a patient only for purposes of observation.

Federal law has prohibited any person convicted of a felony from purchasing or possessing virtually all types of firearm under the Gun Control Act of 1968, which was enacted in response to John F. Kennedy’s assassination. In 1993 the Brady Handgun Violence Prevention Act amended the Gun Control Act to require states to conduct background checks on individuals wishing to purchase firearms. It is important to note that federal law also prohibits the possession of firearms by those convicted of misdemeanor domestic violence.

Proving Felon in Possession of a Firearm Charges

It is relatively easy for law enforcement to prove a felon in possession charge.  They only need to demonstrate that the individual is a convicted felon and that he was knowingly in possession of an operable firearm.  It is crucial for those with a felony conviction to be aware of their responsibilities under the law.  An experienced criminal defense attorney may be instrumental in preventing law enforcement from presenting a strong enough case.

While an expungement of your record as a convicted felon may be complicated, the only other way in Ohio to restore your right to possess firearms is to submit a direct petition to the state under Ohio Revised Code § 2923.14. Anyone convicted of a federal offense may apply for a presidential pardon. Federal regulations (28 CFR § 1.1-1.10) specify the rules governing petitions for obtaining such pardons.

Felon in possession laws were designed with the safety of the public in mind, in order to keep firearms and other ordinances away from presumably dangerous people. Unfortunately, the laws differ from state to state, and in many cases, someone who was convicted decades ago is still unable to own a firearm even for hunting purposes. To make matters worse, state and federal laws may overlap.