While the Second Amendment gives Americans the right to “keep and bear arms,” there are a number of Ohio laws that limit those rights depending on the firearm, how it is used, and who is using it. 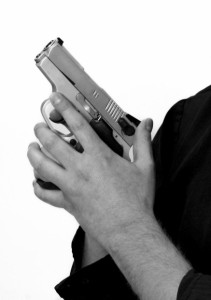 While the Second Amendment gives Americans the right to “keep and bear arms,” there are a number of Ohio laws that limit those rights depending on the firearm, how it is used, and who is using it. Not understanding Ohio firearm laws can result in you being charged with misdemeanor or felony weapon offenses. Being found guilty of a firearm violation will lead to costly fines and often jail time. Once convicted of a weapon or firearm violation, you will be unable to legally own a gun in the future.

Exceptions to Firearm and Weapons Laws

There are exceptions to the firearm and weapon laws in Ohio in which you may not be charged for having or firing a weapon. This can include self-defense, under the Ohio Castle Doctrine. You may also be within your legal right to possess or discharge a firearm if you have a concealed weapon permit. Other defenses can come into play if you are charged with a weapon violation in Ohio. An experienced Ohio defense attorney will be able to help you plan your defense strategy. Successful defenses may include:

In addition, an experienced defense attorney will recognize issues with your case that could allow you to argue any of the following defenses, which may result in charges being reduced or dropped:

There are a number of weapon charges that can be levied against the Ohio citizen who violates the firearms statute, including:

If you are being charged with a weapon violation, you need an experienced Ohio criminal defense attorney to help you navigate the criminal process. For more information and a free consultation, please contact Jeff Hastings, experienced Cleveland Criminal Defense Attorney.

Ohio’s Definition of Weapons and Firearms

(A) “Deadly weapon” means any instrument, device, or thing capable of inflicting death, and designed or specially adapted for use as a weapon, or possessed, carried, or used as a weapon.

(1) “Firearm” means any deadly weapon capable of expelling or propelling one or more projectiles by the action of an explosive or combustible propellant. “Firearm” includes an unloaded firearm, and any firearm that is inoperable but that can readily be rendered operable.

(2) When determining whether a firearm is capable of expelling or propelling one or more projectiles by the action of an explosive or combustible propellant, the trier of fact may rely upon circumstantial evidence, including, but not limited to, the representations and actions of the individual exercising control over the firearm.

(C) “Handgun” means any of the following:

(1) Any firearm that has a short stock and is designed to be held and fired by the use of a single hand;

(2) Any combination of parts from which a firearm of a type described in division (C)(1) of this section can be assembled.

(D) “Semi-automatic firearm” means any firearm designed or specially adapted to fire a single cartridge and automatically chamber a succeeding cartridge ready to fire, with a single function of the trigger.

(E) “Automatic firearm” means any firearm designed or specially adapted to fire a succession of cartridges with a single function of the trigger.

(G) “Zip-gun” means any of the following:

(1) Any firearm of crude and extemporized manufacture;

(2) Any device, including without limitation a starter’s pistol that is not designed as a firearm, but that is specially adapted for use as a firearm;

(3) Any industrial tool, signaling device, or safety device, that is not designed as a firearm, but that as designed is capable of use as such, when possessed, carried, or used as a firearm.

(H) “Explosive device” means any device designed or specially adapted to cause physical harm to persons or property by means of an explosion, and consisting of an explosive substance or agency and a means to detonate it. “Explosive device” includes without limitation any bomb, any explosive demolition device, any blasting cap or detonator containing an explosive charge, and any pressure vessel that has been knowingly tampered with or arranged so as to explode.

(I) “Incendiary device” means any firebomb, and any device designed or specially adapted to cause physical harm to persons or property by means of fire, and consisting of an incendiary substance or agency and a means to ignite it.

(J) “Ballistic knife” means a knife with a detachable blade that is propelled by a spring-operated mechanism.

(K) “Dangerous ordnance” means any of the following, except as provided in division (L) of this section:

(1) Any automatic or sawed-off firearm, zip-gun, or ballistic knife;

(2) Any explosive device or incendiary device;

(3) Nitroglycerin, nitrocellulose, nitrostarch, PETN, cyclonite, TNT, picric acid, and other high explosives; amatol, tritonal, tetrytol, pentolite, pecretol, cyclotol, and other high explosive compositions; plastic explosives; dynamite, blasting gelatin, gelatin dynamite, sensitized ammonium nitrate, liquid-oxygen blasting explosives, blasting powder, and other blasting agents; and any other explosive substance having sufficient brisance or power to be particularly suitable for use as a military explosive, or for use in mining, quarrying, excavating, or demolitions;

(4) Any firearm, rocket launcher, mortar, artillery piece, grenade, mine, bomb, torpedo, or similar weapon, designed and manufactured for military purposes, and the ammunition for that weapon;

(5) Any firearm muffler or suppressor;

(6) Any combination of parts that is intended by the owner for use in converting any firearm or other device into a dangerous ordnance.

(L) “Dangerous ordnance” does not include any of the following:

(1) Any firearm, including a military weapon and the ammunition for that weapon, and regardless of its actual age, that employs a percussion cap or other obsolete ignition system, or that is designed and safe for use only with black powder;

(2) Any pistol, rifle, or shotgun, designed or suitable for sporting purposes, including a military weapon as issued or as modified, and the ammunition for that weapon, unless the firearm is an automatic or sawed-off firearm;

(3) Any cannon or other artillery piece that, regardless of its actual age, is of a type in accepted use prior to 1887, has no mechanical, hydraulic, pneumatic, or other system for absorbing recoil and returning the tube into battery without displacing the carriage, and is designed and safe for use only with black powder;

(5) Dangerous ordnance that is inoperable or inert and cannot readily be rendered operable or activated, and that is kept as a trophy, souvenir, curio, or museum piece.

(M) “Explosive” means any chemical compound, mixture, or device, the primary or common purpose of which is to function by explosion [except fireworks]. “Explosive” includes all materials that have been classified as division 1.1, division 1.2, division 1.3, or division 1.4 explosives by the United States department of transportation in its regulations and includes, but is not limited to, dynamite, black powder, pellet powders, initiating explosives, blasting caps, electric blasting caps, safety fuses, fuse igniters, squibs, cordeau detonant fuses, instantaneous fuses, and igniter cords and igniters.